We went to Paris last December and it was truly one of the best vacations of my life.

Paris has this really amazing vibe to it and I just felt like I travelled back in time when I was there.  Even though Paris is known for the luxurious things and all the glamour, my fiance and I were determined to enjoy the simple things in Paris. I wanted to make the most of every moment and to take in all the beautiful things the city has to offer.

We could have had cooked breakfast in the hotel but we chose to have pastries from French bakeries instead. One thing I definitely wanted to try were all the traditional pastries like croissants, pan au chocolats, almond tarts, macaroons and chouquettes. Pastries were crisp on the outside and  soft inside so I can’t even describe how delicious they are! Let’s not forget about the freshly baked warm French baguettes too; they were so delish!

I wouldn’t like to make any special mentions to any specific patisserie. The beauty of the experience is to hunt for the bakeries and restaurants yourselves. The thing is, I believe that there really isn’t just ‘one special’ patisserie to go to. Every boulangerie in France is great! I think that there are more amazing patisseries out there than the ones we went to. Part of the fun is not knowing what’s around the corner. It’s worth going to as many bakeries as you can.

There was something so amazing about eating pastries in Paris compared to eating them anywhere else in the world. All the pastries I tried were so delicious! I often find that maybe it’s a psychological trick that the brain plays on us. Do you sometimes find that traditional foods seem to taste better when you eat them in the country they originated from?

I couldn’t help myself from smiling every time my fiance spoke in French when ordering or paying for goods. The French language is so amazing to listen to. Every single time someone called him ‘Monsieur’ and me ‘Mademoiselle’ my heart melted. They may be so insignificant for some, but for me they were special and I found so much joy in those little moments.

We also watched and listened to French TV and radio stations. I logged out of my daily Sky News in the morning and I watched French news on TV instead. You may be asking ‘But…You don’t understand French?’ We love the French language (who doesn’t?) and I could listen to it all day! It also helps if you learn and say a few of the most used phrases like ‘Bonjour’ (Hello/Good Morning) ‘Bonsoir’ (Good evening) ‘Mercie Beaucoup’ (Thank you very much). It shows the French people that you are at least making an effort to speak their language.

LOVE IS IN THE AIR

I loved many things about Paris but most of all, I love the romantic vibe I felt while I was there. No wonder it’s called the city of ‘Love’. There were couples in their wedding dresses and suits taking pictures by the Eiffel Tower, lovers holding hands and musicians playing love songs in the streets. There was one guy who played the Cello outside the Sacre Coeur and it was so dreamy especially when he played the classic ‘La Vie En Rose’.

The Wall of Love in the Jehan Rictus Garden in Montmarte

I liked walking around the museums too. We went to the Louvre to go and see the famous ‘Mona Lisa’ by Leonardo Da Vinci. There is a fee to pay to visit the Louvre but it’s worth it in the end because it’s the biggest museum in the world! Our pass was actually valid for 3 days but we only had a day to explore and we didn’t get to visit each room. For me and for many of you I’m sure, it’s all about Da Vinci’s ‘Mona Lisa’. I called my brother and I was able to share the magical moment with him through video chat. It was such a great experience to standing only a few inches away from the original painting of ‘girl with the mystic smile’. My father used to sing the song ‘Mona Lisa’ by Nat King Cole and it reminded me of him too. 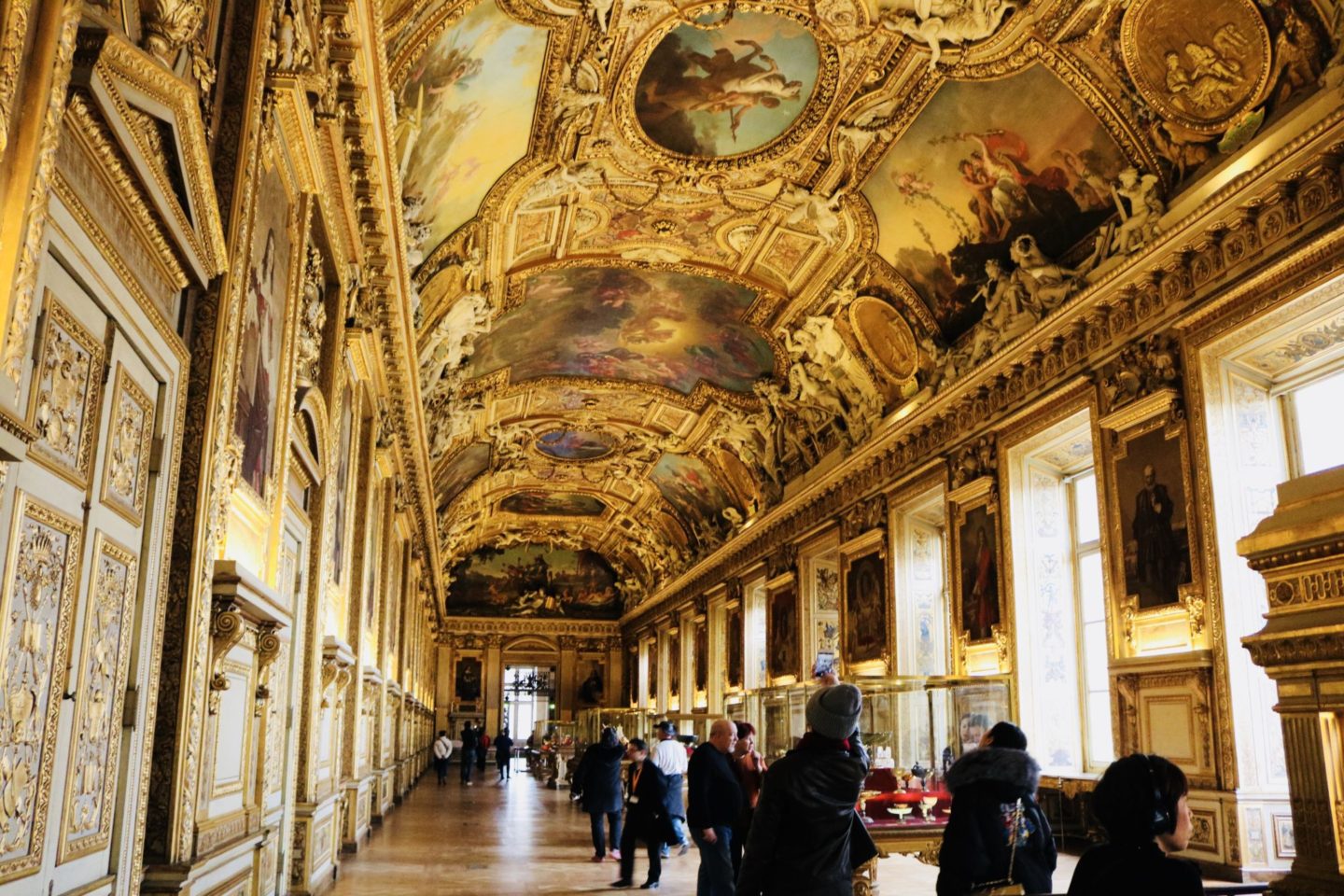 I must say that you need to eat and make sure you are full when you go the Louvre.We spent around £40 on coffees and cake in a small cafe inside the museum and the McDonald’s which was a part of the Louvre is definitely a tourist trap. We were so hungry after a full day of walking around the museum and on the way out, we realised that there was a shopping area and a food court just by the Louvre exit. We decided to go for McDonald’s as everything else was expensive but to our surprise, McDonalds cost triple the price than what we would normally pay anywhere else. We shared 20 Chicken nuggets and a coke to ease the hunger until we found a restaurant for dinner. I’m sure they were the most expensive chicken nuggets and coke we have ever had so we savoured each and every bite. Avoid these tourist traps and there’s plenty of them in Paris so definitely watch out!

You can still go to Moulin Rouge but you don’t have to go and watch a show to enjoy it. Simply standing and taking a picture of the famous building was enough for me. If we had more time, we might go and attend a show but I was just happy to stand outside the venue and check it out.

Another amazing thing we did which didn’t cost us a penny was going to Trocadero and enjoying the famous Eiffel tower. It was one of the moments which took my breath away ( and for many other reasons which I will write about in a separate blog post) Trocadero offers a really great view of the tower. We were there to see the sunrise and the sunset and honestly, it was one of the highlights of my life…something I will always remember. We also went up the Eiffel Tower which was an amazing experience. We spent around £60 for two tickets which wasn’t too expensive. You get a few ticket options when you go up the tower. You can pay to use the elevator, the stairs or do half and half. We chose to do half and I’m glad we did because it was definitely tiring. When you go up to the top, you will see a really nice view of the city and it was again, breathtaking and something everyone visiting Paris must do. I hope to write a seperate post about going up the Eiffel Tower very soon.

I didn’t care so much for shopping and the fashion districts of Paris. A lot of women go to Paris to score the latest limited edition Chanel handbag or shoes. Some people go crazy for Dior or Yves Saint Laurent. I must say that of course, I love all those things too but I really wanted to make the most of the short time we had in Paris so I decided to forget about the material things and I focused on the great city instead. We went to Galleries La Fayette and yes, it is grand and with all the Christmas decorations it looked so pretty inside but I spent 20 minutes walking around  admiring the festive displays and I got so bored and hot that we decided to skip the shops altogether. The only thing I bought in Paris was a grey scarf to fight the cold because the scarf I brought with me wasn’t big enough. We can get anything online these days so I thought that shopping wasn’t that important. Apart from some things you know you can ‘never ever ever get’ anywhere else other than Paris (like the white box and packaging from the main Chanel store in 31 Rue Cambon) then go ahead and shop however, don’t get too trapped in stores especially high street ones because you’re just wasting your time looking at things you can buy back home and online.

Be in the moment.  Look around and admire French architecture. Look at the top of buildings and notice their beautiful details. Watch and listen to musicians who play on metro stations and look out for artists in the streets. Connect to the world around you. Admire the natural beauty money can’t buy. Really pay attention to what’s going on around and be present. Honestly, that’s the best travel advice I will forever repeat over and over again. Be in the moment, take everything in and that’s always free my friends…

You may also enjoy:

I Wonder Why Some …

Why You Should Never …

Have You Ever Caught …

How To Shop Responsibly …

Today Is The First …

How To Look After …

So, We Finally Started …